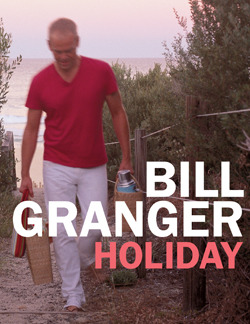 Bill Granger has long been something special among TV cooks. His lifelong passion for cooking has been conveyed in an unostentatious fashion, but always with a welcome clarity and avoidance of gimmickry – and as Holiday conveys, those qualities are carried over into Granger’s cookery books.

Bill Granger opened his first restaurant in when he was 22 and the second three years later. A third followed in Sydney in July 2005. The success of those restaurants – based as much on Granger’s personality as on his innovative recipes – has led many enthusiasts for his TV shows and books to try to emulate at least his cookery – if not his business success. The concept in Holiday is an unusual one: Granger tells us a holiday is much more than travel, but is about a state of mind and the enjoyment of happy accidents; there should be a sense of discovery – and that is precisely what Granger conveys in the recipes presented here. This is a particularly personal collection, mainly consisting of recipes that he has created for his own young family. As ever, the recipes are straightforward and uncomplicated (one of the reasons for Granger’s considerable success, as most of us could have a shot at the recipes on offer here). Whether you are tempted to try something as straightforward as chicken burgers with lemon grass and lime (infinitely more interesting than the fare you’ll obtain in most hamburger chains) or whole grilled fish with curry paste, your gameplan for preparing these straightforward culinary delights is here. As always with Granger, alternatives are presented if particular ingredients are not available. Copies of this book are likely to adorn many a kitchen table.