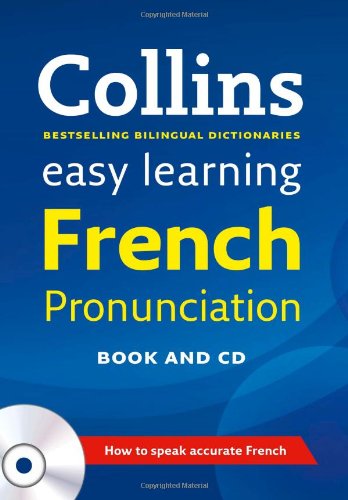 A step-by-step guide to French pronunciation that will help you to build your confidence and communicate better in French. If your French accent is letting you down, Easy Learning French Pronunciation is perfect for you. You’ll see and hear how to soften the influence of your mother tongue and speak clear French everyone will understand. Aimed at beginners and at intermediate students who want to undo bad habits, Easy Learning French Pronunciation focuses on spoken French, and will help you to improve your pronunciation, confidence and fluency. The booklet and audio CD will guide you through how to pronounce each sound and gives real-life examples of where these sounds are used. It will help you recognize why your native language makes you mispronounce certain sounds and which sounds you therefore need to focus on. There are also plenty of opportunities for you to practice the French sounds while listening to the native French speaker on the audio CD. One of the sections focuses on pronouncing items from a typical French menu, so you can be sure you will always be understood. The booklet also contains illustrations of the mouth showing how to make French sounds and memorable cartoons to help you remember pronunciation rules. In addition to teaching you how to pronounce French words accurately, Easy Learning French Pronunciation also covers the differences between the French and English alphabet, stress and rhythm, the differences between accents within France and provides information on the differences between the French spoken in France and Canada. Easy Learning French Pronunciation is a fun and enjoyable way of putting the finishing touches on your French accent!