The Omnivore’s Dilemma
The Secrets Behind what You Eat 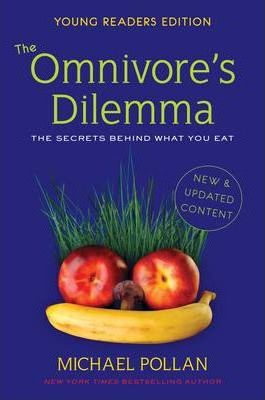 “What’s for dinner?” seemed like a simple question – until journalist and supermarket detective Michael Pollan delved behind the scenes. From fast food and big organic to small farms and old-fashioned hunting and gathering, this young readers’ adaptation of Pollan’s famous food-chain exploration encourages kids to consider the personal and global health implications of their food choices. In a smart, compelling format with updated facts, plenty of photos, graphs, and visuals, as well as a new afterword and backmatter, The Omnivore’s Dilemma serves up a bold message to the generation that needs it most: It’s time to take charge of our national eating habits – and it starts with you.

Before I began working on this book, I never gave much thought to where my food came from. I didn’t spend much time worrying about what I should and shouldn’t eat. Food came from the supermarket and as long as it tasted good, I ate it.

Until, that is, I had the chance to peer behind the curtain of the modern American food chain. This came in 1998. I was working on an article about genetically modified food—food created by changing plant DNA in the laboratory. My reporting took me to the Magic Valley in Idaho, where most of the french fries you’ve ever eaten begin their life as Russet Burbank potatoes. There I visited a farm like no farm I’d ever seen or imagined.

It was fifteen thousand acres, divided into 135-acre crop circles. Each circle resembled the green face of a tremendous clock with a slowly rotating second hand. That sweeping second hand was the irrigation machine, a pipe more than a thousand feet long that delivered a steady rain of water, fertilizer, and pesticide to the potato plants. The whole farm was managed from a bank of computer monitors in a control room. Sitting in that room, the farmer could, at the flick of a switch, douse his crops with water or whatever chemical he thought they needed.

One of these chemicals was a pesticide called Monitor, used to control bugs. The chemical is so toxic to the nervous system that no one is allowed in the field for five days after it is sprayed. Even if the irrigation machine breaks during that time, farmers won’t send a worker out to fix it because the chemical is so dangerous. They’d rather let that whole 135-acres crop of potatoes dry up and die.

That wasn’t all. During the growing season, some pesticides get inside the potato plant so that they will kill any bug that takes a bite. But these pesticides mean people can’t eat the potatoes while they’re growing, either. After the harvest, the potatoes are stored for six months in a gigantic shed. Here the chemicals gradually fade until the potatoes are safe to eat. Only then can they be turned into french fries.

That’s how we grow potatoes?

I had no idea.

Cook Yourself Thin Quick and Easy
19.90