Backwards in high heels
The impossible art of being female 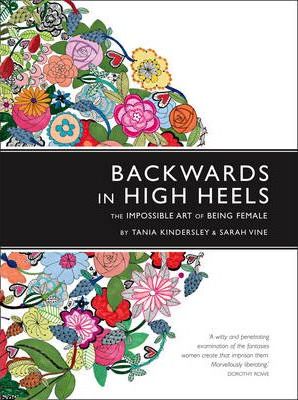 The world is a fraught place for the contemporary female. Working mothers are still expected to make their children’s costumes for the school play, despite the fact that home economics was abolished in the Seventies; we’re told it’s not looks but brains that count, and yet if we dare to leave the house looking vaguely our age we’re made to feel like failures; women’s magazines run earnest articles about the evils of size 00 culture, only to feature models with hips like 10-year-old boys a few pages later; we pay the same level of taxation as men, and yet on average we earn 25% less. So, this book – a book for women who never got around to perfecting the art of domestic divinity but would quite like to be able to cook supper for six without having a nervous breakdown; who never quite mastered Cosmo’s 101 ways to please your man, but don’t want the embarrassment, not to say inconvenience, of him running off with a 19-year-old Russian supermodel. It’s your mother, your best friend, your guru and your shrink wrapped up in book form, with jokes. It’s the antidote to every stupid, boring, reductive magazine article you’ve ever read, or every silly, hair-twirling, chick lit confection about girls called Arabella who marry bankers and live in Gstaad.
It’s for women who love their children but don’t want them to run their lives; and for women who love their lives and won’t have them run by children. It’s about revising expectations, exploding myths and generally dealing with all that life, love and other people have to throw at you.